Get fresh music recommendations delivered to your inbox every Friday.
We've updated our Terms of Use. You can review the changes here.

by Jack Mackrel & The Muddy Skids 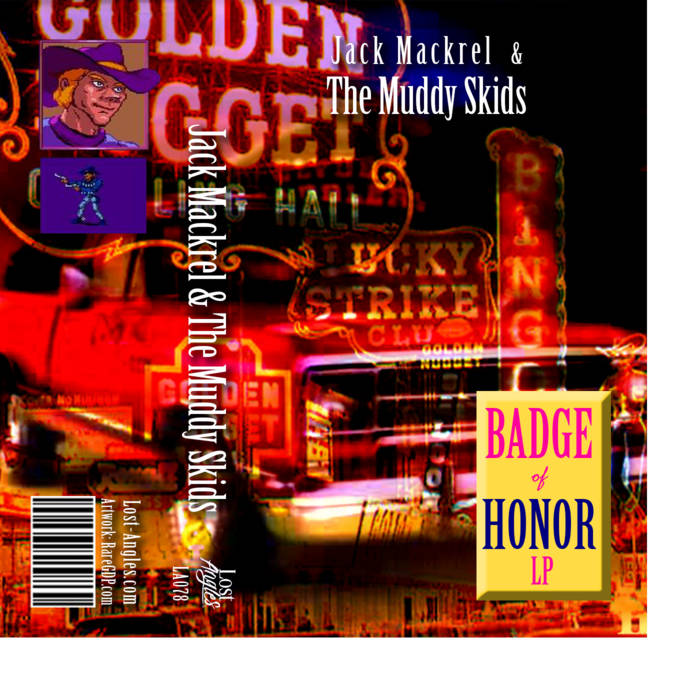 I guess it all started back in 2014 when I started noodling around on an acoustic guitar in my bedroom and tried to capture the sound and soul of my heroes; Hank Williams, Johnny Cash, Roy Orbison, and Michael Nesmith//The First National Band. They somehow managed to make country music “cool” in an era where bro-country had become the norm. I wasn’t like any of the folks that sort of music was aimed for; I was more interested in hanging out in my bedroom and watching old cowboy movies than drinking beer and driving trucks or whatever. Call me out-of-touch I guess, but that was never for me, and probably won’t ever be. I met a few folks around the time I was graduating high school and we all started the Muddy Skids together; partially as a joke and partially to see where we could go with the sounds of country. Everyone we knew hated it because they listened to “anything but rap and country” and so we were on our own for most of our time out in this small town in Oregon. We wrote some music, played some gigs, and thought we had something good going, but nothing really clicked, and after we released our first CD “The Final End Of Silence” in 2015, the original Muddy Skids lineup had fallen apart. That story is for another time, but by then I had spent a lot of that time in hiding and traveling. I would go out for food, I would go out to the movies, and I would waste my time doing whatever I could. At some point in between the breakup and the various jobs I held to keep me going, I decided to take a risk and I took out the money I had, hopped in my car, and had gone so far out east that I ended up being in New York, or in other words; far enough out from home where I couldn’t find a way to get back home from Oregon. I was here, and this time it seemed as if I was here for good.

In June 2017 I had finally made a home for myself in New York out in the small towns and mountains I had somehow always dreamed of when I was a young man. After a few months of living off the goodwill of strangers and family who were kind enough to help me out until I got back on my feet, I had found a job at one of the smaller gas stations where I would occasionally talk to the town folks and sell them various junk food for way more than it was actually worth, but hey, that’s capitalism for you I guess. It was at this job that I would eventually meet drummer and record collector extraordinaire Cole Jackson.

Cole was a bit of a loner who, at the time, was keeping beat for a local metal group at the time, but he seemed bored in a band where he wasn’t coming up with ideas, rather just being asked to drum what their bassist had been writing. Cole had many brilliant ideas he gathered and modified after having spent the better part of 10 years collecting obscure 45s from the ‘60s, grabbing whatever $1 LP bin snags he could get, and ultimately ended up with an entire wall of records that would make most people envious. It was through this envy and some other connections that I would be introduced to our bass player; Billy Jack Stone.

Billy brought out the low end nicely during the first few months of shows before eventually becoming the multi-instrumentalist who kept our sounds afloat, using everything from a violin, to an accordion, to even a singing saw (he claims he heard some hipster bullshit band by the name of Neutral Dairy Farm or something and got the idea from them but it’s all gibberish to me.) He brought an element of suspense and horror to the shows. Our first show with Billy in the fold ended with him cutting himself up and bleeding all over himself and the audience who was there at the time. He was an odd fellow, but he could play a good tune if needed, so we kept him on board. Eventually he would become the hype man for the group as well, and it was because of this that he caught the attention of Colonel Walton.

Colonel Walton, though not an actual Colonel (he was more of a Sanders-type Colonel if you know what I mean) ended up becoming the leader of the Muddy Skids. Walton was an eccentric millionaire and though no one really knows how he got his money, he brought much of the twang back that I had been trying to recapture ever since the original lineup’s falling-out in 2015. Much like Brian Wilson from The Beach Boys, he would help compose a majority of the tracks, add little piano flourishes here and there to make a tune all come together, and was ultimately the one who brought us back closer to center while still allowing me to do my own thing. He’s a sweet older man who knew what I was going for.

We kept playing songs until one day near the end of our run of 2017 shows we met an odd fellow who simply went by the name of Princess Commodore 64. We thought it was strange considering this “Princess” was actually some heavy-set dude who wore heart-shaped sunglasses,a jean jacket, and had a weird thing for White Castle burgers. We all ended up bonding over the love of weird instrumentation and the confrontational live shows we had somehow managed to put on until that point, though, so we ended up becoming close friends during that time. Eventually we ended up hearing some of his work he had done with “The Big K Collection,” “The Death Of A Culture,” “Death Of A Lifestyle,” and “I Am Death” and we were completely blown away by these bizarre sounds he managed to create and manipulate on his own, so when we finally felt confident enough to go into a studio and record our first album, he was the first person we gave a call, and that ended up changing the course of our history as a band.

Walton, PC64, and myself all sat down after we had recorded all the tracks for our album, an we all tried to collectively work our magic. Though we were a bit skeptical about the idea of presenting this album to the general public we were finally put at ease once we heard the opening strums of “Sugar Water” and later on “Johnny Casino USA” we were immediately on board. Later on some of the tracks recorded during those sessions would become the “Glory Daze” EP, and would help give us a soft reboot and soft reintroduction into the world. Eventually we would find out that Princess Commodore 64 had been shopping the album around to labels to see if anyone would bite on this weird fusion of dream pop and country we had somehow created, and though it would end up being a few months until we heard anything, we finally got word from Lost Angles that they would be willing to put out our weird manifesto for the world to hear.

Later on, we would listen to the record and have a small release party that ended up almost getting the cops called on us because it was a packed basement where the audience and the music were leaking into the street and the houses next door. Once we finished our set and packed up for the night, Cole looked over at me and mentioned that “it’s a badge of honor, for what it’s worth, right? I mean look at how far we’ve come.”

Cole didn’t know it then, but we found a title for our album.

A badge of honor, maybe, but how far could it carry us?

Jack Mackrel & The Muddy Skids are…